Disco Dunne a.k.a Conor is Bodytonic’s resident disco DJ and general manager. Rumour has it he has the faces of Abba tattooed somewhere on his body… 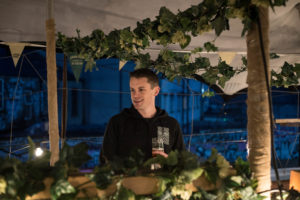 Here’s a little more about him:

I’m from Dublin. I started working in The Bernard Shaw back in 2006 when it first opened. Took a sabbatical to China and returned to run The Square Ball in 2015.  Now I run Brewtonic and south side Bodytonic bars The Bernard Shaw, MVP and The Square Ball. Co-run Social Hops project which is in its third year and run Brewtonic Beer Festival, returning in September 2018.

13 Seconds Porter. Think we nailed our first dark beer with this one, very drinkable, rich, roasty. Went down like Aldo.

The one that stands out was Motor City Drum Ensemble at The Bernard Shaw in 2009. Incredible atmosphere and music in the place that night. The peak of 12 Sundays night that ran for years in The Shaw. Federer won Wimbledon that day too…

Love running, digging for and playing records and uncovering Youtube comedy gold. Discovering new cities and the best food and drink within.