Some say his beard is hiding the original disco ball from Twisted Pepper, others say it holds wondrous magical powers. All we know is he’s Packie who runs Wigwam. Here’s a little more about him… 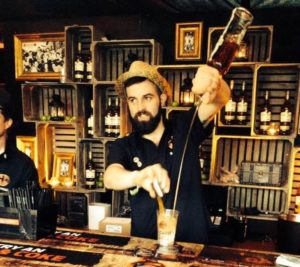 Another Dub via New York. I took a year out of a nursing degree then got a job in a little Pub called the Square Ball, that was in 2015. Rum enthusiast and some time soda maker, love nothing better than putting on a great party and seeing people enjoy it.

Nothing beats a can of something cold and hoppy on a sunny day, failing that, Ron Zacapa 23, neat.

Probably give up this vegetarian craic and head straight to Fowl Play for a platter full of ribs, wings and brisket.

Getting the nod to take over Wigwam, a lot of history in the building and it’s really exciting being on the front line for the next chapter of the group.

Find a balance of friends, family and NFL.

Traded my personality for a beard.