One of Brazil’s best exports and now he’s one of Brewtonic’s brethren, Pedro heads up the team at Botequim in Wigwam and has taught us all how to cook potatoes properly. 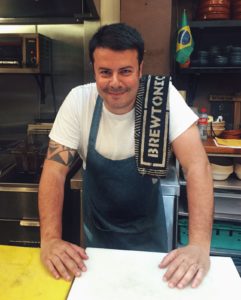 I’m a Brazilian native and best friends with Neymar. I once did a 2 week course on how to cut cassava and it’s said that nobody has better cheese balls than me.

A cold beer on the beach can’t be beaten.

A big plate Feijoada and some chicken hearts, basically anything from Wigwam.

Carnav-Ale in collaboration with Hopfully, really nice ale with flavours of guava and coconut. It was my first time being a part of the beer recipe development and it was a great experience, we launched it just in time for Carnaval and everyone loved it!

When I sold my very first spudbox in MVP back in 2014. It was emotional and beautiful.

I love to cook on open fires, so we made an upcycled barbecue out of old kegs and we called it the BeeBQ. I love having outdoor parties and using the BeerBQ whenever I get the chance.

I was selected to play for the men’s international soccer team in Brazil but decided to come and work with Bodytonic instead.